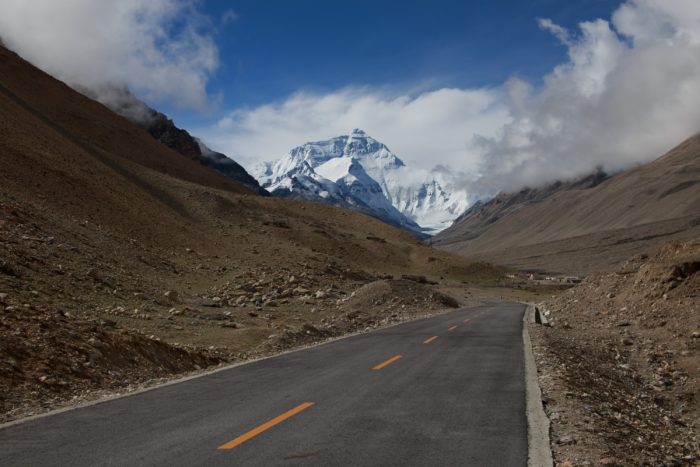 Cycling Everest results in way too many imagines on this page.

Ever since I was a kid and found out about this mythical mountain, Mt Everest, I knew I wanted to see it for myself. Years of watching documentaries and learning more about the mountain only increased my desire to one day visit.

After reading a CyclingTips article where a few riders tried an Everesting on Everest, with SerkCycling, I knew I’d found a way to visit Everest.

In December I signed up for the Serk.cc Cycling Everest trip and booked annual leave at work. The rest is, as they say, history.

Unlike the CyclingTips guys I did nothing to prepare for the altitude and have never been above 3,500m before in my life, let alone done any exercise at that height.

Below are mainly exerts from my notes along the journey, unfiltered. I hope you enjoy the journey as much as I did.

The trip started (for me) with a flight from Singapore to Chengdu. All the riders met in Chengdu and we also met Liman from Serk.cc. We would stay the night in Chengdu before flying to Lin Zhi early the next morning.

Liman was amazing for the entire trip. The organisation and effort she put into the trip definitely makes for an easy and unforgettable journey.

Lin Zhi is at an altitude of 3,000m and it was a good place to start to the trip. When we landed the air pressure was lower outside than in the plane, a weird sensation indeed.

We imediately met our Tibetan guide Keltze who was full of energy, gave us an introduction to Tibet, lay of the land and definitely made the whole trip a pleasure.

When we jumped on the bus the first thing visible was an oxygen bottle. This trip was going to be no joke.

We took the bus from the airport to the hotel, settled in and then built our bikes.

In the afternoon we set off for an easy 30 kilometre ride. This allowed everyone to check their bikes, get a feel for the altitude and a feel for how the legs would feel later in the trip.

My legs were okay, but I was noticbly short of breath riding at even a very moderate pace. Riding at high altitude generally rates high on the perceived effort scale.

It is super challenging riding around here. The roads are nice but never flat and there was a headwind all day. I have a bit of a headache still.
We are riding through a valley at the moment and there is a large river between the valley walls. There is a lot of construction and a sparsity of towns. There are more people living in the areas than I thought but it is very remote. Everyone smiles and waves. They are all very inquisative when we stop. Looking at us, our bikes, coming to say hello.
Its maybe what I would call an arid climate, warm, a little windy, cool air. Trees and greenery around at the moment however as we climb higher they will stop.
Lots of wildlife around horses, yaks, (mini) cows and other animals freely walking around along the road and through the towns.

Amazing ride continuing up to vallery to Shannon, about 170km from Langxian. The bus dropped us 70k up the road in Gyaca and we rode 100km to Shannon. To say the scenery was amazing wouldn’t do it justice. There were some snow capped peaks above 4,500m as we rode through the valley.
We are 300m higher in elevation now and during the day I felt fantastic. I got burnt, even though I put on 50+ sun block.
My headache has returned, I guess it will be rinse and repeat for the next 10 days.

Riding the road along the Yarlung Zangbo River was quiet. The surface was smooth and traffic was almost non existent.

The towns and shops along the road were minimal at best. Once we arrived in Shannon the landscape changed, the town was amazing. Filled with life and colours.

The Semye Monestary was built between 775-779 and it was the first Buddist monestary built in Tibet.

Tomorrow we ride a 22km climb peaking out at 4,770m and it will most likely be snow capped. From tomorrow onward we are above 4,400m and I expect most of the peaks will be snow capped.

The first real test of the trip climbing the spectacular Khampa La Pass. I pushed a big effort up the climb and suffered later in the day while we rode along the picturesque Yamzho Zamco lake.

I had to sleep the whole afternoon and then only started to feel better after eating. Sleeping at 4,500m was tough, the air was thin and everyone had a restless night.

We rode over the Karo La Pass at 5,100m and through some glacier capped mountains before dropping down into the valley for a headwind downhill ride all the way to Gyantse.
With 1,000m less elevation than the top of Karo La Pass the air feels incredibly thick again and I can breathe easy again.

I was still suffering from the efforts of day 4 so took it very easy up the Karo La Pass climb. It turned out to be a stunning day on the bike after the pass.

We rolled out of the hotel after an easy breakfast and rode 97kms downhill to Shingatse. The ride featured a 40km strava segment that Andy, Thorsten and I rode flat stick. We rolled the segment at an average of 45kph and finished it in 53 minutes.

With rain looming and a desire to stay dry we beat the rain into Shingatse and checked into the hotel before putting our feet up and waited for the rest of the crew.

We drove 132km out of Shingatse to Lhatse before jumping out of the bus. The ride was 76km with 1,300m of climbing we were faced with the Gyatse La Pass at a height of 5,248m. This is one of the highest sealed roads in the world.
A tough but beautiful climb. The road snakes up a valley with non tradition switch backs before opening up to a windy final 3km push to the peak.
We rolled downhill easy to Tingri and settled into the hotel. Which had an oxygen bar opposite the check-in desk.
Some tourists were wrapped up in blankets with oxygen tubes plugged in. I guess the altitude was too much for them.

The final day of the tour and perhaps the hardest day for me. Alarm set at 3:30 for a 4:00am depart. A short drive through 2 security checkpoints before we started riding at 5:00am.

Ascending in the dark was almost easier than in the sunlight as I wasn’t able to see the gradient or the top and was just pedaling. Left foot right foot. When I reached the top of the pass at a mere 5,198m I was cold, tired and in no mood to descend into the dark fidget air.

The climb to Everest Base Camp was mainly a false flat for 30 km before pitching ramps in the final 10 km.
2 hours passed and I made it.
The great Qomalong Ma was cloud covered for most of the journey to base camp however once we arrived the clouds burnt off and we had an unprecedented view of the mountain.

Serk and the team do an amazing job of organising, preparing and ensuring everyone can concentrate on simply riding and having a good time.

The food was mostly spot on, some smaller towns had amazingly good food which was a pleasant surprise. In the more remote towns the breakfast was basic, most days being Chinese or Tibetan style. If you have special dietary requirements or prefer a western breakfast I would recommend taking cereal with you.

As expected the accommodation situation varied from town to town. We were treated to some amazing hotels along the route, conversely we also had some basic rooms to sleep in which added to the sense of adventure.

With coffee and Cycling going hand in hand the Serk coffee shop was open most days!

If you have any questions about the trip, or how to get started on this adventure yourself, please leave a comment below, or head over to serk.cc/everest/ for more details.

I can highly recommend the trip. I would love to hear if you have ridden in the region yourself, please let a comment below.

3 thoughts on “A Cycling Journey to Everest in Pictures”