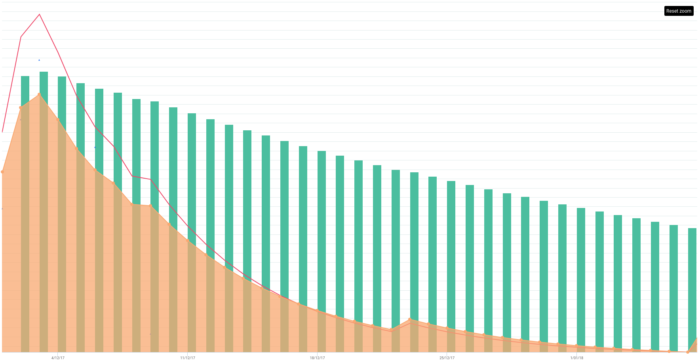 In this series of articles I try to document the fitness effects after an extended break from training. And the subsequent journey to regain that fitness.

If you are starting your journey, you might also be interested in this article. Surprisingly the plan, goals and challenges are not too dissimilar for someone who had fitness and lost it, or someone who is just starting out. Perhaps the only significant differences are the intensity and ramp rates.

As the seasons ebb and flow so does life, workload, family, commitments and fitness. Time for training can only be prioritised after life’s necessitates have been taken care of.

In an ideal world having more time to train and build fitness would be great, however there is a point at which one needs to stop and take a break. In December 2017 everything lined up and life pushed my training aside for a much needed break.

After a natural disaster caused the cancellation of a race at the beginning of December my motivation was lacking, suggesting I was already at risk of over-training. This cancellation started my planned break 2 weeks early; ultimately making December void of training.

Alcohol coupled with a relaxed diet meant the perfect storm was born for a physical and mental reset, and a bit of weight gain.

I wanted to document this extended break from training and the subsequent fall in fitness. Also giving an overview of the process of getting back to a reasonable level of fitness. This is to illustrate how it is possible to come back from an extended break in training.

This will be the first part in a series of articles. Please comment below, or get in touch if there are aspects you would like to hear about.

The effects of an extended break – The fall in fitness 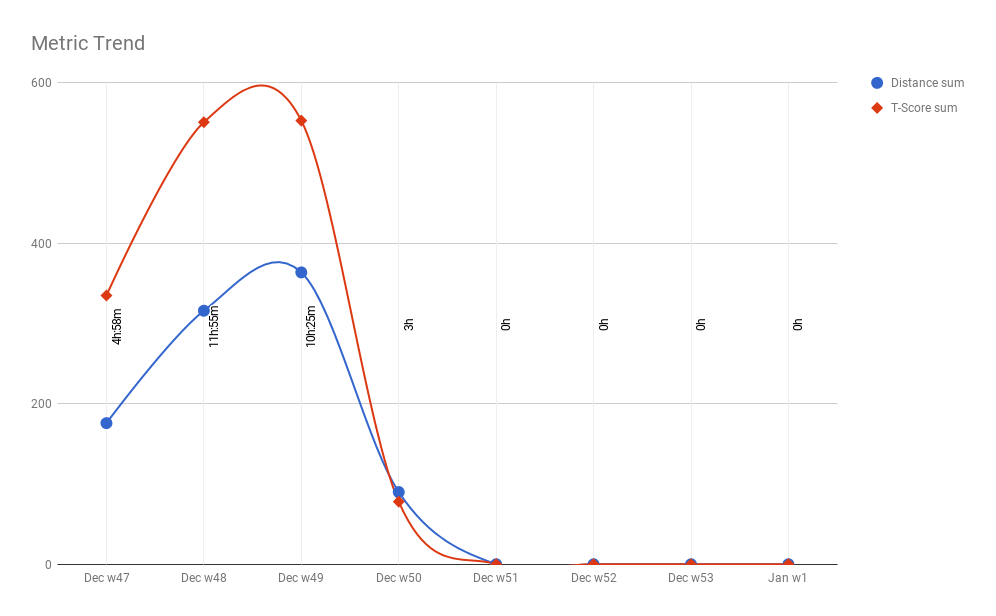 All together I had 6 weeks of rest from the bike; starting in December and running through to the 2nd week of January. During the 6 weeks my diet went from relatively normal to outright lazy and I did next to no exercise.

At the start of December I was hovering around 71-72 kilograms and had a reasonable level of fitness. By the end of the 6 weeks my weight was above 78 kilograms.

Within the first week off the bike my weight had not changed, but my fitness levels dropped by 13%.

The second week my weight was up 1 kilogram and experienced another 18% loss in fitness.

In 2 weeks that’s 1 kilogram of weight gain and on over 30% loss in fitness. Nothing crazy on the weight side, but the fitness drop off is already significant.

It’s worth noting that weight gain or loss will lag a change in diet and exercise levels; your body will take some time to adapt to the new energy requirements.

Onto the 3rd week and my weight was up to 76.6 kilograms. That’s around an 8% increase in 3 weeks. Pretty significant change in weight in a short period of time. 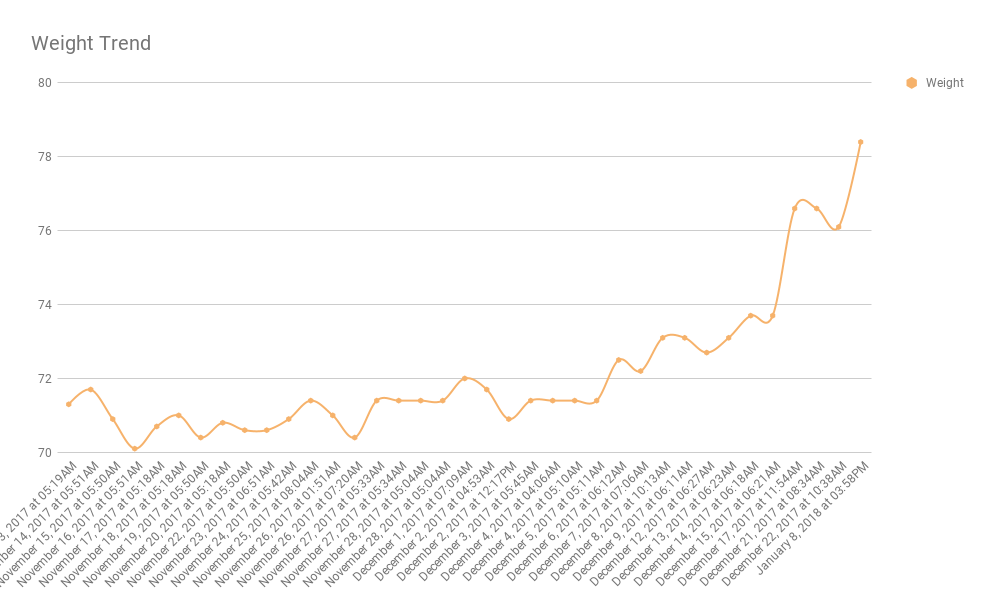 My weight peaked at 78.4 kilograms on the 8th of January which was roughly week 5 into the break, and a week before I started riding again.

By the end of my break my fitness levels were less than half of what they were at the beginning of December. 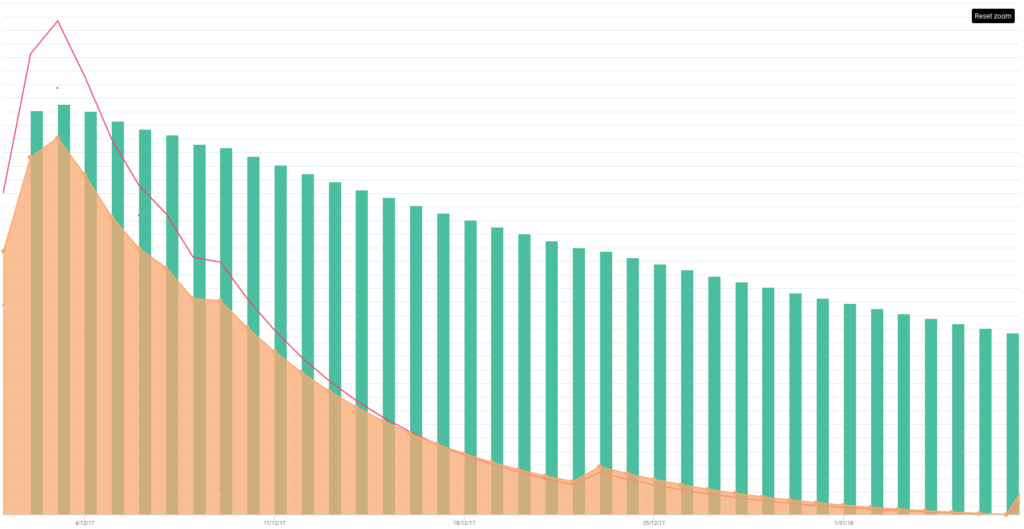 You might be wondering how I’m measuring my fitness, I’m using the TrainingPeaks Fitness metric.

The return to Fitness after an extended break

The (return) journey is always a tough one to start. I knew gaining a fitness level I was happy with would be mentally challenging.

Just how far my fitness had slipped was something I was not prepared to accept. In my mind were the sensations of full strength and power so the reality check was real during my first few rides in 2018.

My first ride was a 37 minute disaster of an indoor session. I had set out to do a 1.5 hour session on the trainer, one which I had easily nailed in the middle of November. I was expecting to get through it, albeit painfully. This was not even possible and I had to climb off the bike during the middle of the 3rd effort.

3 days later I was to race Pulau Indah, which is a pan flat 180 kilometre race in Kuala Lumpur. At the last minute the race did not go ahead given the organisers were unable to secure police escorts.

In Lieu of the race we did an 80 kilometre group ride, and that was enough for my legs. 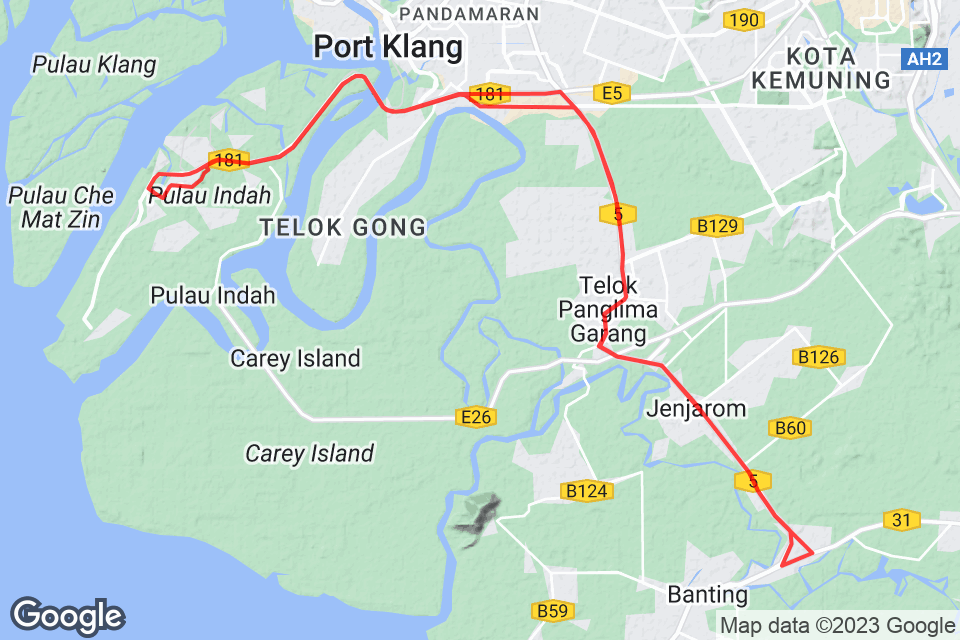 How do you regain fitness after an extended break

In the following articles I try to answer this question. The return to fitness has to start with a plan.

In the next piece I will outline the plan and goals I set myself, and try to give you an insight into the work required to achieve them. There will be sacrifice and injuries along the way. It has been a long journey and as I write this I’m still not quite there.

I guess the fitness journey is an ongoing one, one which cannot be finished.