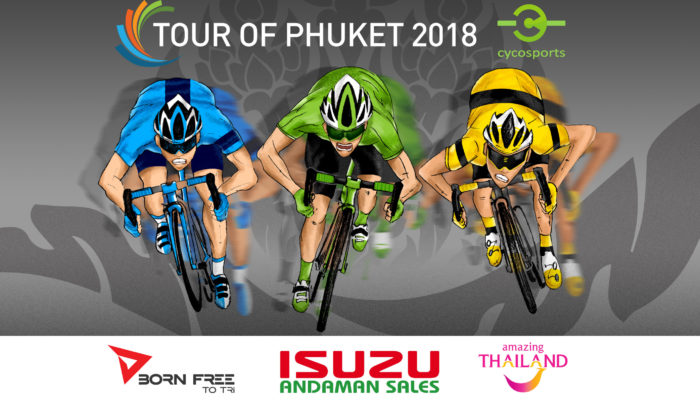 The 3rd edition of the CycoSports Tour de Phuket was run over the weekend of May 09 – 11. It is the the 2nd time I have raced this race and the first time on this course.

The race consisted of roughly 243 kilometres of racing over 3 stages. With less than 1,000 m of vertical gain on both stages 2 and 3; the race was one for the Puncheurs.

Racing in Asia is always a bit of an adventure and this tour certainly was interesting one.

I was unfortunately taken down by an overhanging branch as we entered the final of stage 2; the inability to complete the stage or race stage 3 was disappointing.

All eyes were on 2017 ITT winner Pavol (NICH-100PLUS) to perform well this year and set a blistering time. The course was 4.4 kilometres in length with no significant change in elevation; the road sweeps around Phuket Gateway and with coastal areas wrapping around the gateway the wind was to play a factor.

I was fairly early to start and put down a solid time of 05:30.39 placing in the provisional lead.
With an average speed of 48.00 kph. Putting out an average of 406 watts and with an average HR of 177 bpm, it’s fair to say I was cooked after crossing the line.

Todd (Berwick Cycles) put out the next best time and with a time of 05:35.77 he was sitting in a provisional 2nd place.

Ben (Specialized Roval Mavericks) out of the gates 2nd last put in a blistering time of 05:28.02 to take stage honours.
With an average speed of 48.29 kph. Putting out an average of 352 watts and with an average HR of 178 bpm.

To win the Time Trial at Tour de Phuket you need a combination of power and speed (and probably some aero).

As stage 2 started the feeling in the peloton was mellow and there was not a huge impetus to ride. Knowing the temperatures would be in the mid to high 30’c everyone was content with a sedate pace.

Rolling through the neutralised zone in the first 15 kilometres the team of Specialized Roval Mavericks massed at the front to control the pace with the aim of deterring any breakaway attempts, or keeping them in check if they went.

The first attack came around kilometre 40 as Benedikt (matadorRACING) head off in what was likely an attempt to take the KOM jersey. Shortly afterwards team mate Edo (matadorRACING) bridged over to form the main breakaway of the day.

The Specialized Roval Mavericks continued on the front holding the break within reach.

We rolled past kilometre 67 and found no KOM climb. The moto leading our group had mistakenly taken a wrong turn and instead of doing a U-turn to correct the path, he simply abandoned and left the race.

Luckily the road looped back to the race route, however we did not go over the KOM climb and missed roughly 8-10 kilometres of racing.

The 2 breakaway riders were now behind the peloton but had secured the KOM as they were the only riders to have ridden over the KOM climb.

The 2nd KOM hill caused the peloton to break apart at around kilometre 97. Konstantin (Roojai.com) set a solid pace which first strung out the peloton then significant gaps started to open.

The climb is 1.46 kilometres in length at an average of 5% but contains a short descent before kicking at the end. It’s deceptively hard and the ramps were greater than 10% inclines.

The front of the peloton raced the climb in 03:25, setting the Strava KOM in the process.

During this time Ben (Specialized Roval Mavericks) pushed 5.57 w/kg, Michael Kleinwort (matadorRACING) pushed 5.77 w/kg.
In comparison Pavol (NICH-100PLUS) pushed around the same power at 5.75 w/kg however was 10 seconds slower going over the climb.

After the climb the race was on. With the final well and truely started anyone who was out of position, or tired, would certainly have a difficult ride from here until the finish line.

The pace for the last 25 kilometres was a speedy 41.7 kph and no riders were given any leeway. The group size continued to shrink as riders dropped out the back.

The final 3 kilometres being raced over 50 kph. Leading into the final kilometre the Roojai.com team were in control of peloton and a cheeky team move saw Yi Peng (Roojai.com) drift off the front in the final to secure the stage victory.

The third stage of Tour de Phuket raced in 02:29:16 making for an average speed of 39.10 kph. The race was on from the gun and no breaks were allowed to leave the peloton in the first half of the day.

The first significant ramp of the day coming at kilometre 20. A 2.9 kilometre ramp of 3% which was insignificant to the bunch as all GC riders were comfortably settling into the day.

The following 4 remaining climbs were over and back across the hills and the pace of the day did not get any easier. Each climb would zapp the legs and build fatigue.

Boon (Berwick Cycles) got clear of the group at kilometre 68. A strong move howerver the peloton caught him on the slopes of the second ascent of the KOM hill.

Shortly after the 2nd KOM hill Pierre-Alain (Allied World Kemp Technology) put in a solid attack which went clear for 10 kilometres. Again the peloton not leaving anything out front caught him with around 10 kilometres to race.

With many distanced riders after the 2nd KOM hill the front of the race had shrunk in size. Leading into the last 10 kilometres the bunch started to play games allowing riders to rejoin the front group.

The same finish as stage 2 meant everyone had prepared for what would ensue, and the final 700m did not disappoint. The leaders covered the distance in less than 1 minute.

How the race was won?

The race was won in the Time Trial by Ben Arnott (Specialized Roval Mavericks) who finished with the bunch on the following 2 stages. With enough time buffer to hold onto the overall lead after time bonus’ were issued.

Time bonus in the Tour de Phuket can play a part in deciding the overall victory, however in 2018 it was only one rider who gained and held the jersey throughout.

Being a race for the Puncheurs it was going to be difficult for climbers to get any significant time gaps opening up on stage 2 and stage 3. Adding to that the climbs are all some distance from the finish line, allowing any dropped riders to rejoin the front of the race.

Like this article? Checkout my review of the Masters Tour of Chiang Mai 2017.
Looking for more races? Checkout the Events Calendar.